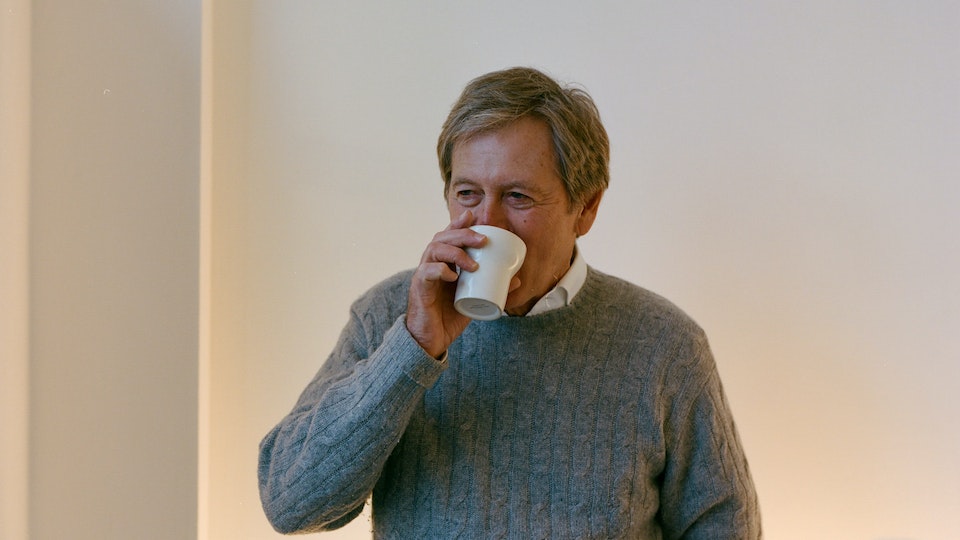 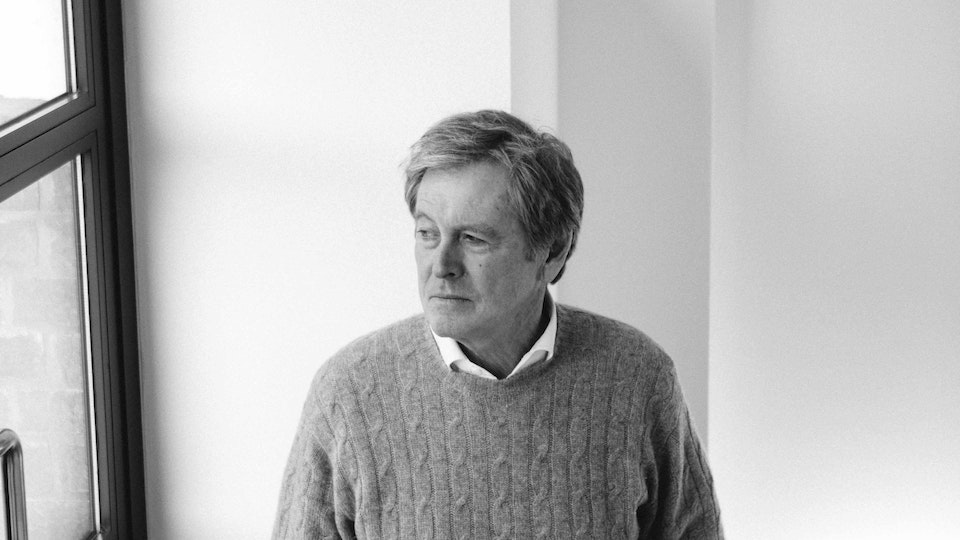 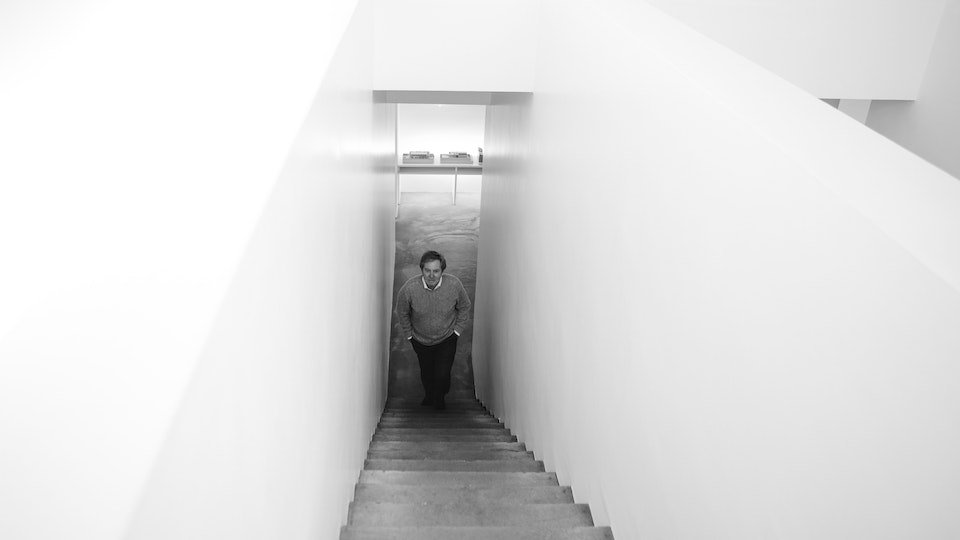 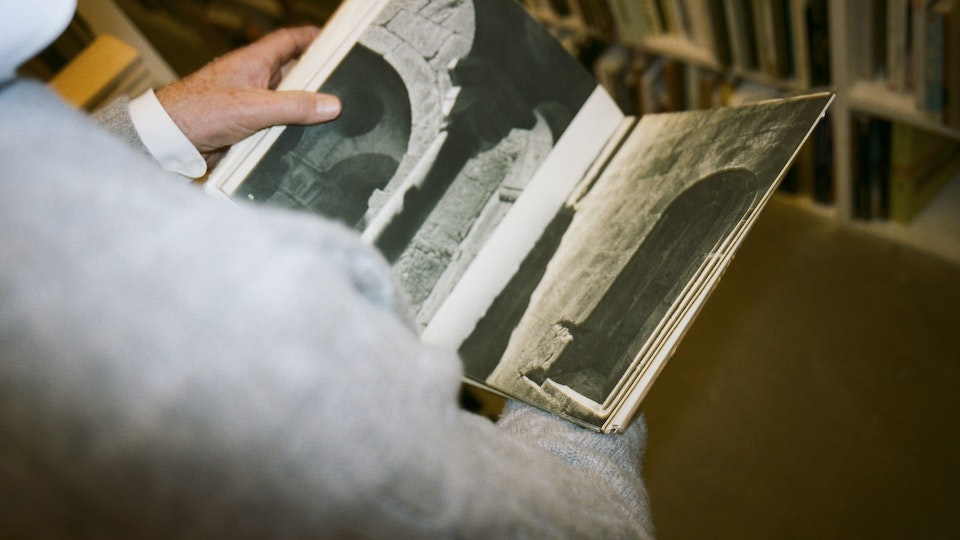 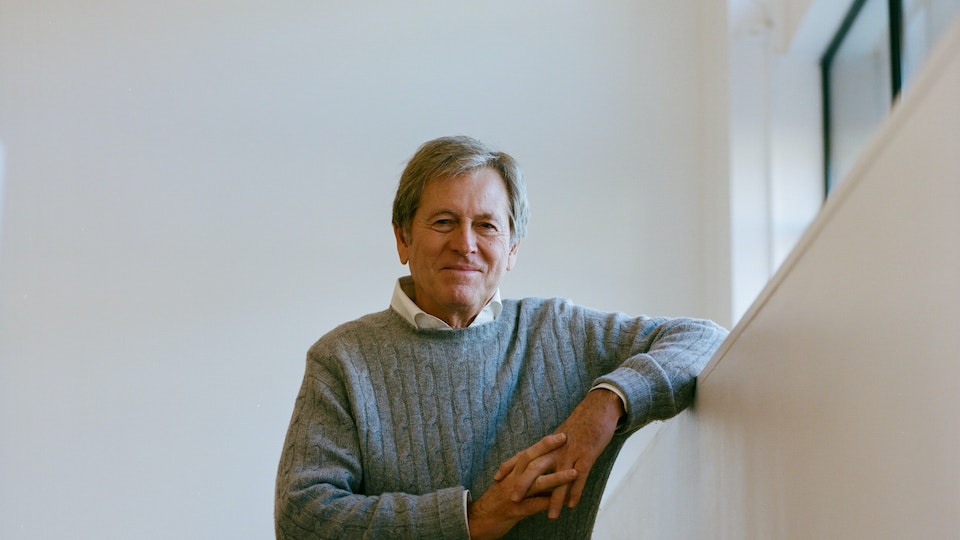 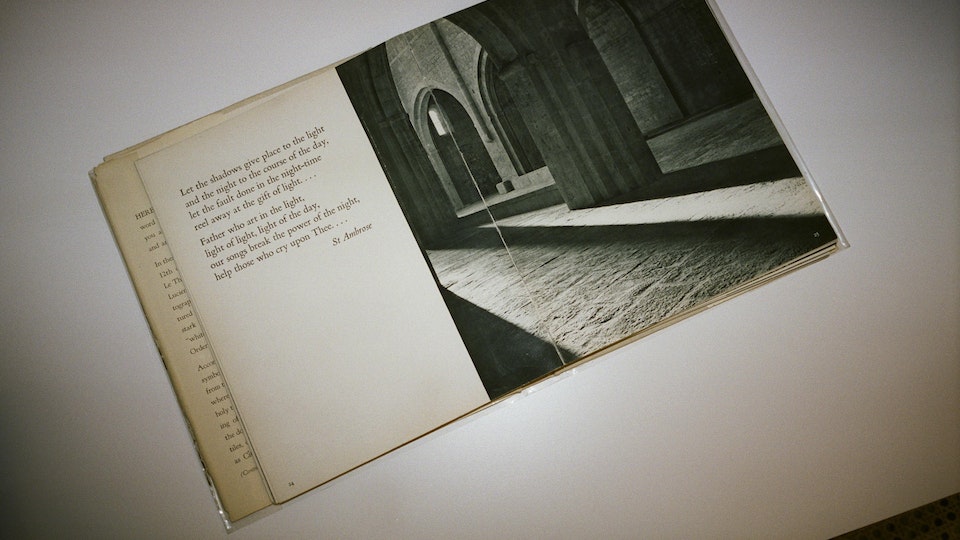 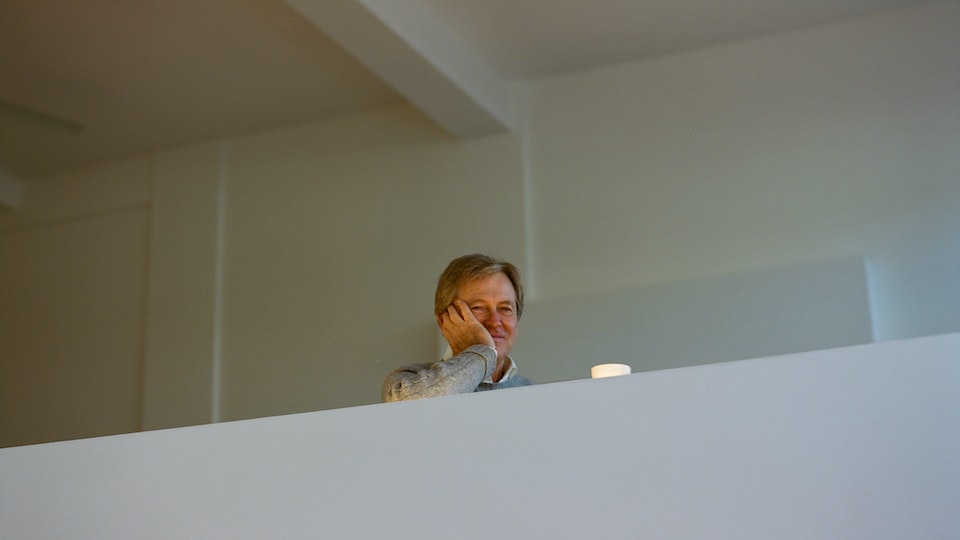 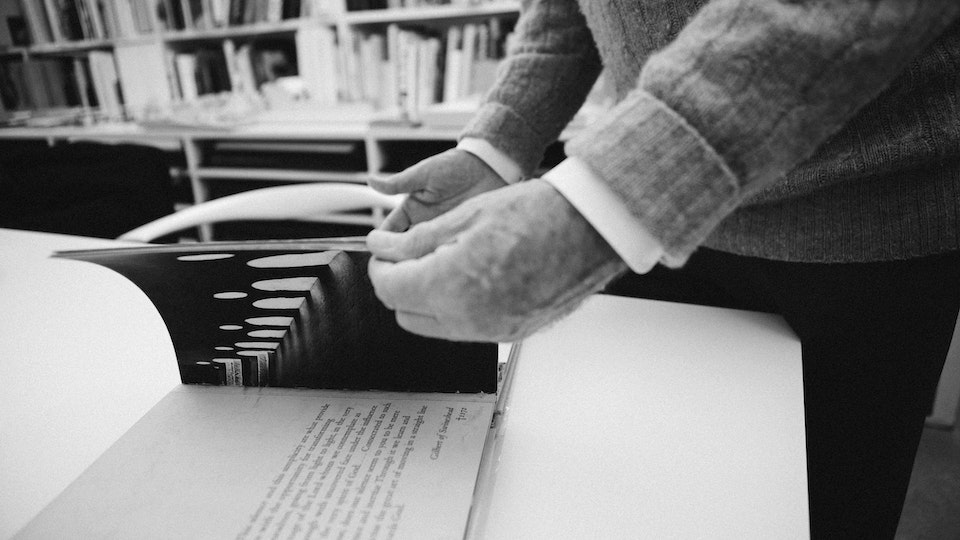 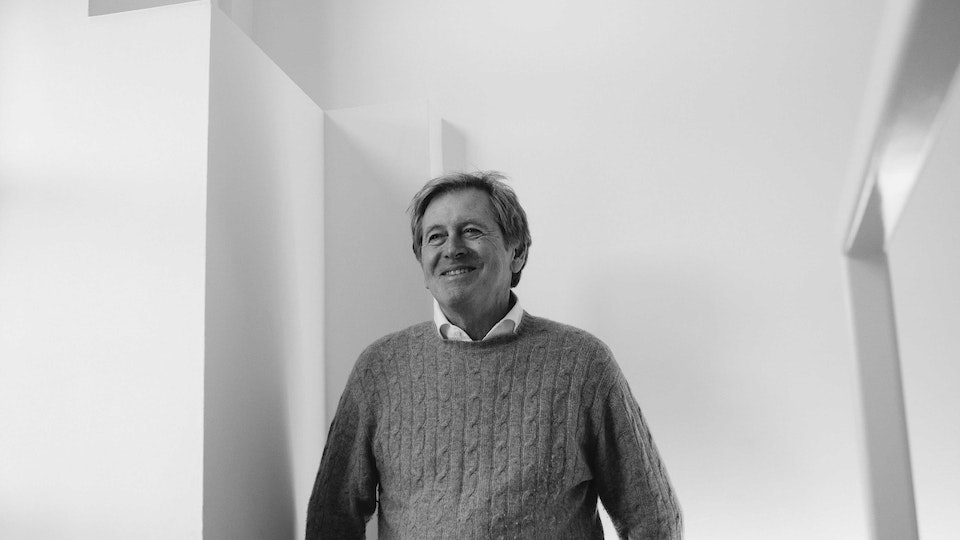 On a sunny winters day in January, I found myself standing in front of a building that I had long admired from afar, but never knew who might have occupied. Whenever my train pulls into and out of London, back to the homeland that is South Yorkshire, I’d often stared at that very building through the grubby window, and now here I was, waiting for Jess (MacCormick, photographer), on our latest assignment. It’s the kind of repurposed industrial building that gives you the feeling someone or something great would be found inside.

Jess and I were directed to a light-filled studio, to have a nosy and wait for John to join us. When I first emailed JP (as he likes to sign off, now with the addition of CBE at the end) back in the autumn, I quickly understood that he was every bit as unexpected and refreshing as his body of work. The studio was a minimalist dream, with a concrete staircase, a neat library of books and shelves full of materials in light, muted tones. But when John arrived for a chat and photos, coffee in hand, he wasn’t quite as I expected – he likes to have no structure to his day, he’s into trainers (day wear and gym) and listens to Frank Ocean. Intriguing.

Can you describe the journey you took that lead to starting your own design practice?
Spending time in Kuramata’s studio in Tokyo had a profound impact on me and on my sense of what might be possible. It was because of Kuramata that I enrolled at the Architectural Association when I returned to London. The next significant step was working on an apartment belonging to Hester van Royen, who was my girlfriend at the time. She was involved in the art world and people she knew would come round, like what they saw and ask me if I would do something similar for them. I never meant to have a studio and for a long period I had no files, because I was afraid of becoming too conventional.

Can you describe to me the 3 main design aspects that are integral to your work?
Light, materials and proportion.

From where do you draw inspiration for each site / project?
Everything starts with the site and my responses during the first visit to a place. I do think there are advantages to having come to architecture relatively late, because I’d already experienced so much.

Do you have days where you don’t feel inspired, and if so, how do you overcome this?
Not really, and also I have always believed that, regardless of whether you feel the ideas are flowing, you have to keep your head down and work at it every day.  Having a team helps - with the work and with the thinking.

What does a 'typical day’ as John Pawson look like?
There isn’t really a typical day and that’s how I like it.  I think it’s important for things not to be too structured. I might be travelling, or on site, or looking at stone samples.  Wherever I am, the thought processes are always turning over.

Do you have a ‘uniform’ for work? Perhaps your wardrobe is for both work and play and there is no separation?
I don’t have a uniform as such, but I do always wear the same things - which include grey trousers in winter, khaki in summer.

Is there an item in your wardrobe you could not live without?
There’s nothing superfluous, so if I did without anything, I’d probably be arrested.

What’s your biggest weakness
Because I enjoy my work so much, I don’t stop, so I get tired.

When you’re not working, how do you like to relax?
Walking and cycling.

What are your favourite places for…

…coffee?
Either at home or there’s a bar near the Pantheon in Rome where they make forty different variations of espresso and cappuccino.

…art?
The National Gallery in London, for work by the 17th century Dutch painter, Saenredam.

…holiday?
The Karoo in South Africa.

What are you currently…

…listening to?
Frank Ocean, Travis Scott and anything produced by Rick Rubin.

…reading?
In the very little time I have for reading, it’s rarely fiction and more likely to be something related to a project I’m working on.

…interested in?
I’ve become even more interested in landscape since I’ve started spending time at Home Farm, our house in Oxfordshire. Just watching the seasons change is such an intense pleasure.  I love the way you can see so much further in winter. Even when you’re looking through glass, it all feels very immediate.

…most looking forward to?
Watching my step grandson, Calder, growing up.

Tell me your top three favourite spaces in the world? They can be your own, or not.
It’s so difficult to choose - the Katsura Palace in Kyoto, the interior of Mies van der Rohe’s Farnsworth House, under the vaults of Louis Kahn’s Kimbell Art Museum, Donald Judd’s arena in Marfa and any shop interior by Kuramata…

Name three men who inspire you.
I’m going to start by naming three women, who are my wife, Catherine, to whom I owe everything, Hester van Royen and Martha Stewart. My choice of men would have to include Calvin Klein, who has all three of the attributes required for life in a creative profession, which are drive, charm and talent; Shiro Kuramata, who played such an important part in my life and who also had an extraordinary gift in his work for turning dreams into physical reality; and John Andrews, one of my tutors at the AA, who taught me that design is something you can learn.

What’s the best piece of advice you have been given?
My father always told me to keep some brass in the bank, which I never managed to do, always feeling more comfortable when I had worked my way down to zero and was faced with the pleasure of earning some more. My mother’s advice was not to wear my heart on my sleeve. From both of my parents I learned the value of a rigorous work ethic.

Are there any upcoming exciting projects or collaborations you can share with us?
I’ve worked with some pretty exciting collaborators, like Wayne McGregor, but I like to think that all of my work is a collaboration with the members of my office.

Finally, if you weren’t an architectural designer, what would you be?
Architecture was my last roll of the dice - I’d tried pretty much everything else.

©2022 chi san wan —. All rights reserved. No part of this website may be reproduced without permission.